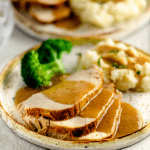 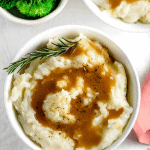 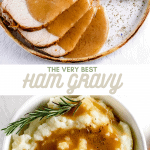 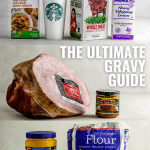 Ham drippings make a classic ham gravy. Let's explore which combination of ingredients creates the very best gravy! We're testing cream, milk, flour, cornstarch, drippings, and no drippings to make an easy, tasty gravy with ingredients you have on hand.

Contents hide
1 Why this gravy is amazing!
2 But what if I change up the ingredients?
3 With drippings or without drippings?
4 Flour vs Cornstarch
5 Cream vs Milk vs Broth
6 Ham gravy without roasting a whole ham
7 How to prevent clumpy gravy?
8 How much bouillon do I need?
9 Need more recipe ideas?
10 Ham Gravy
10.1 Ingredients 1x2x3x
10.2 Instructions
10.3 Video
10.4 Notes
10.5 Nutrition

Why this gravy is amazing!

If you've ever had ham gravy, then you know it's the smokiest, most flavorful gravy out there! It is truly the best. I was curious which thickener made the best texture; cornstarch or flour. And which base created a super yummy taste. I tested broth, milk, cream, and even coffee! I roasted 2 hams to understand the difference between ham gravy with drippings and without. Yes, you can use ham bouillon to make instant gravy!

First, I baked a pre-cooked ham. I ended up not adding a glaze, and the flavor was still amazing. Glazing a ham with brown sugar and honey is optional. Then I took the drippings and combined them with butter & flour to make an easy ham gravy. This is the standard recipe I'll be comparing everything else against!

But what if I change up the ingredients?

With drippings or without drippings?

There are two ways to get a ham base for the gravy: oven roast a whole ham and use the smokey broth in the roasting pan or buy ham bouillon to make a broth within minutes.

What I found: Drippings can be tricky. Since my roasting pan is HUGE, all the water I put in the pan plus any juices from the ham evaporated out, how disappointing! I had to roast a second ham and put plenty of water in the pan to 1.) prevent the ham from drying out in the oven, 2.) to ensure enough liquid to get flavored in the baking processes.

I made several batches with bouillon and was blown away by how delicious and easy it was. Ham bouillon is a worthy way to make ham gravy without the hassle.

If you're baking a ham, you might as well whip up a gravy because the drippings are phenomenal. But I promise you won't regret the shortcut of using store-bought bouillon. Better than Bouillon makes an excellent ham base which you can find locally and on amazon.

Ham broth made from roasting a ham was better than using bouillon. But the bouillon was delicious too, maybe a close second.

Both are common thickeners when making gravy. I almost always use cornstarch because it's fast and easy. Dissolve cornstarch into water, then mix it into your hot broth with a touch of butter. So easy!

When using flour, you mix it with equal parts oil or butter in a skillet. Continually whisk it for several minutes. To avoid clumping, to cook out the raw flour taste, and to prevent it from burning keep whisking. Yes, this is more work, but browning the flour adds a layer of flavor.

Cornstarch is pure starch, so it thickens very quickly and doesn't require extra boiling to reduce the gravy.

Flour is mostly starch, but it also has protein. Because it's not pure starch, you might need a little more flour than cornstarch. You might also need to simmer and reduce the gravy to get your ideal thickness.

I've heard it said that flour holds up better for reheating but I didn't think it was a huge issue.

What I found: After making several batches of gravy, the flour is the absolute winner. Because we're simmering butter and flour together, the butter browns, and the flour gets nutty. It is so flavorful it's a no-brainer.

If you need gluten-free gravy, then absolutely use cornstarch. If you brown the butter in the skillet before adding the broth, then you'll at least have that dimension of flavor in the final product.

However, if you need dairy-free, gluten-free gravy, use oil and cornstarch instead of butter and flour. The smoky qualities of the gravy will still go above and beyond a traditional brown or country gravy.

Cream vs Milk vs Broth

Even when roasting a large ham, there might not make enough drippings to make gravy. My goal is to have 2 total cups of liquid in the measuring cup. It can be a mix of 2 cups of drippings and/or store-bought ham bouillon dissolved in water. You can use ½ cup of ham broth with 1.5 cups of cream or milk. Red-eye gravy is ham gravy with coffee as the liquid!

What I found: I had more than enough ham broth from my roasting pan because I added 2 cups of water to it before putting it in the oven. My ham broth was super flavorful but also very salty. Because I can't ever get enough salt, I didn't dilute it with water. If you don't have enough ham broth you can use chicken broth to make up the difference.

Between using straight broth (either bouillon or drippings), milk, and cream, I discovered my personal preferences.

Milk gave the gravy a classic country gravy taste. I was good but my least favorite. If you love country gravy, then you'll want to make this version.

Cream absolutely knocked my socks off! It was a rich, smoky cream sauce reminiscent of alfredo sauce. My husband took the leftover creamy gravy and mixed it with a pound of cooked pasta and chopped ham. That was his meal prep for the week.

The broth-based gravy was my favorite. It was rich and flavorful but not heavy like the cream base was. I would make both again, but the broth gravy was just perfect.

*Using coffee base for Red-eyed gravy was very earthy. Not a winner but interesting to try.

Let's say you want ham gravy, but there are a thousand reasons you're not cooking a whole ham. Maybe it's not Easter, Mother's Day, or Thanksgiving. Maybe the stores don't have a giant ham, or you don't need to feed a crowd.

If you want to test this recipe in under 20 minutes, all you need is ham bouillon which you can buy on amazon or in certain stores. Add butter & flour to a skillet, whisk until smooth for about 2 minutes. Slowly pour in your liquid and whisk. After a few minutes, add more liquid. Simmer gravy until you get your desired thickness. No drippings required!

How to prevent clumpy gravy?

When using cornstarch, always dissolve the starch into room temperature water and whisk well! Since cornstarch starts thickening when it touches the hot liquid, it needs to be fully dissolved in cold water before being added to a recipe.

To prevent the flour from clumping up, be sure to whisk it thoroughly into butter or oil in a skillet for a good two minutes. Use low to medium-low heat to prevent burning the butter. Just whisk until smooth.

One thing I noticed when using cornstarch, even when the gravy cooks clump-free, once it starts to cool, the film on the top adds clumps after you stir it.

How much bouillon do I need?

For two cups of total liquid, I used 3 teaspoons of Better than Bouillons Ham flavor. They recommend using 1 teaspoon per cup, but I used 1.5 teaspoons per cup instead. I love a salty, rich flavor. If you want your gravy less salty, then use less bouillon.

When I made ham gravy with broth only I used 2 cups of water and 3 teaspoons of bouillon. 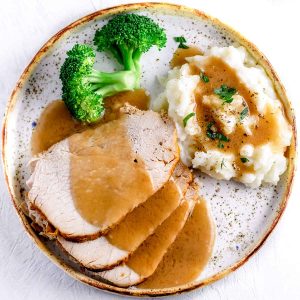